Dentist Jared Anderson, is a competitive paraglider. How competitive? Dr. Anderson, DDS of Bend, OR, became the USA paragliding champion in 2016. He also set an Oregon state distance record in paragliding from Pine Mountain to just past the Steens Mountains, a whopping 145 miles!

Dr. Jared Anderson began paragliding in 2009 and began racing competitively in 2012; he joined the world cup circuit in 2014 and made the US paragliding team in 2015.

Jared Anderson competed for America in the 2015 World Paragliding Championships.

Summer of 2016, he placed second at the Chelan Flats Paragliding Competition.

In the summer of 2015, he set the Oregon state distance record in paragliding from Pine Mountain to just past Steens Mountain, which was 145 miles.

Here is a link to Hang Gliding and Paragliding Magazine, where you can read a story about Dr. Anderson’s paragliding career on page 14-17.

See Jared Anderson here in a video of one of his races this summer at the US Nationals [INTERVIEW BEGINS AT 1:49] 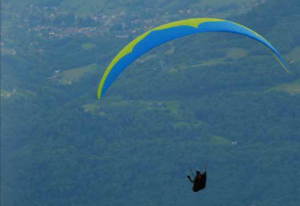